For years now, I have tried in vain to reach my fellow citizens: to explain to them how the things they claim to want and are demanding actually work against their own self-interests, as well as those of their fellow man.  Sadly, I have found that too few care to listen, and of those few who do listen, fewer still can be reached through reason.  It seems that the majority of my fellow citizens have surrendered to their baser emotions.  Though it pains me to say this, I find that, more and more, I am being forced to feel sympathy for Paine’s assertion that those who do not understand or embrace reason have aligned themselves with the likes of animals.  Still, unlike Paine, I do not subscribe to the notion that reason is all there is to this life.  I, for one, know better.  But this does not mean that a person is free to throw reason into the waste basket, either.  For, to live purely by emotional desires and fears is, as Paine suggests, to live as an animal.  To be human, one must live somewhere between the heart and mind; between emotion and reason.  To be human, truly human, we must use one to guide the other, but we must definitely embracing both to be whole.

Which leaves me with this dilemma:

If so few among us can even recognize the proper application of reason, let alone embrace its use, then how are we to reach and persuade our fellow citizens?  They know too little of how to use reason and critical thinking.  They know too little about the history behind mankind’s discovery and mastery of these skills.  Heck, they don’t even know the history of how these things have been intentionally taken from them and, even now, are actively being kept from them.  So, how does one reach someone who is woefully ignorant of the very thing that can help them change their world, let alone the foundations upon which that thing is built?

But the growth of ignorance in our society reaches far beyond our loss of man’s understanding of reason.  It has eclipsed most everything we know.  No longer do we understand the concepts of rights, morality, virtue, duty or honor or personal responsibility.  Worse, the majority of us do not even realize we are ignorant, let alone how deep our ignorance goes.  Instead, we have become convinced that we are smarter, more educated, more enlightened and, therefore, more ‘advanced’ than any group of humans that have come before us.  The result is a combination not only hostile to Liberty, but to the continuation of society, itself: a combination of impenetrable ignorance combined with a sense of infallible arrogance!  Dare I say this, but I truly believe that  — whether consciously aware of it or not — a great many among us have come to believe they are their own god!  But who can blame them when the people responsible for this atrocity boasted that this was exactly what they believed: than man is his own god?

If I am not careful, I will lose sympathy for the plight of those who have been blinded — blinded through now fault of their own.  They have been blinded — intentionally — by those who seek to build the world according to the desires of their own hearts; by people who believe they are above the masses, better, more enlightened than the average man.  Blinded by people who believe they alone have the moral duty to perfect the individual by perfecting society and then helping the individual to accept the place assigned to them within this perfected society.  Blinded by individuals who, by their own admission, mean no harm and, therefore, pose no threat to society or the individual.  Blinded by people who, in the process of doing all this good for so many, never once consider the possibility that they will not and might not ought to be the one who makes all the decisions for the rest of mankind.  No, I must not allow my cynicism to turn me against the blinded  rather, I must stay focused on those who blinded them.

Still, I cannot help but return to the same recurring question:

How do I reach those who cannot reason, yet think they reason better than I?  How can I enlighten those who do not realize they are ignorant and are too arrogant to allow any light to penetrate their indoctrination?  How?  How does one reach such people?  Or can they be reached?  Must I consider the possibility that such people are beyond help: permanently lost to the rational world?  The very real possibility that this may be the case not only breaks my heart, but it frightens me to my very core because — though he used different words to say it — a far, far better man than I seems to have arrived at this very conclusion: 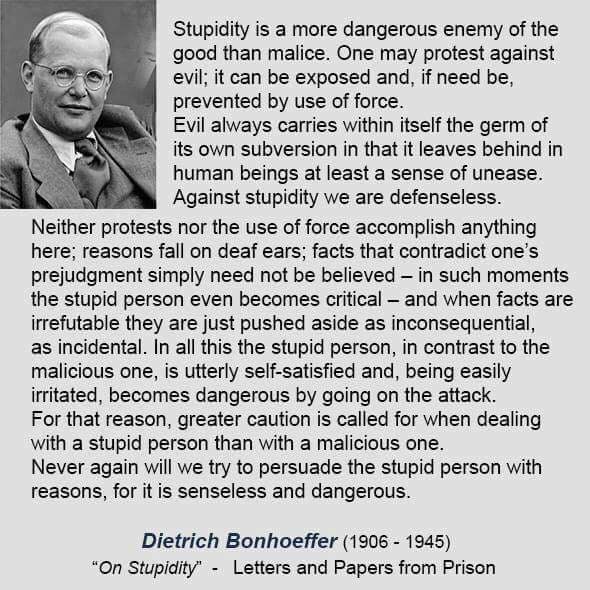 I fear Bonhoeffer’s conclusion because I know where it leads.  If one decides that one cannot persuade through reason, the only thing left is to either leave the ignorant alone — in which case one faces almost certain ruin — or one must use force — in whatever form — to push the ignorant in the direction one feels they should go.  The problem with that option is that, at that moment, the moment when one decides they must push to save, in that moment, one casts aside any and all pretense of righteousness and joins the ranks of those who have decided they know better than the masses.  At that moment, you become the very thing you started to stop or correct…

3 thoughts on “EDITORIAL: If One Cannot Reason with the Irrational, then What?”

Your comments are wanted and welcome, but are moderated before posting Cancel reply